The Wavering Severity of the Gospel

A couple of weeks ago I blogged about the Actual Gospel, and I mentioned a statement I’d heard that we Christians can be rough on people concerning their utter sinfulness. Maybe, this person said, the preacher’s too hard on the congregation with his constant sin bashing. The long-time believer surprised me when he threw in, “It’s not like we’re ax murderers or anything.”

This is where the severity of the Gospel begins to waver. Surely he wasn’t insinuating ax murderers are the only condemnable sinners. If you want to know who needs a rescue from sin, just take a walk down the Romans Road. If you’re unfamiliar with Christianese, the Romans Road is a quick and easy way to explain the Gospel by walking a sinner through selected verses in the book of Romans. If you want to know how I feel about Christianese, read this: A Beginner’s Guide to Talking like a Real Christian http://wp.me/p4CqdN-3Z

Now, don’t think I’m opposed to repeating comfortably memorized scripture when you’re sharing your faith. Go ahead and do it. There is nothing more perfectly designed for reaching the lost than the Word of God. Here’s that walk through Romans:
3: 23 …for all have sinned and fall short of the glory of God.
6:23 …the wages of sin is death, but the gift of God is eternal life through Jesus Christ our Lord.
5:8 …God demonstrates His love for us, in that while we were yet sinners Christ died for us.
10:9 …if you confess with your mouth the Lord Jesus and believe in your heart that God has raised Him from the dead, you will be saved.
10:13 …whoever calls on the name of the Lord will be saved.
Is it that simple? Yes. Can a sinner repeat these verses three times and go to Heaven? No. Can a believer forget, or never realize, the depths from which he was rescued? I don’t know—that’s God’s call. I do know people who never did anything horrible and seem to feel they deserve to be saved, but they’re not sure those other people—the ones who sin big—are entitled to God’s grace. I’ve never met a redeemed ax murderer but if I did, he’d probably be sure about it. He’d understand the severity of the Gospel.
I call it severe because it’s strict in its application. You can’t choose the lite serving instead of the mega platter. It’s difficult for a rebellious heart to grasp, and harsh in its demand of death as penalty for sin. It causes irreversible and ongoing destruction to the sin nature of an individual, and eventually to the overall effect of sin in the world.  Another definition of severe: plain, unelaborated. Nothing added. That’s the Gospel.
I use the word wavering not as an indicator of the Gospel’s lack of stability. It is not unsteady nor does it fluctuate. But sometimes we believers can waver. We disregard the fact that we were hell-bound sinners. We thoughtlessly suggest salvation is for church people, not for the freaks who insult our sensibility. Or just as misguided, we insist that sin is sin and it doesn’t matter if you tell a white lie or bludgeon someone to death. God’s got it covered.
Wait, doesn’t He? Does it matter if I sin big or sin little? No, it doesn’t matter—not when it comes to settling my eternal destiny. To the person at the other end of my little lie, or the blade of my ax, it matters severely. The guy I lied to can forgive me if I go to set things right. The other guy, well, he’s dead.  If he could, he’d say my sin against him was much, much greater. Will God forgive me? I can ask Him. From prison. Does God redeem imprisoned, entirely guilty murderers? Of course.
Whoever calls on the name of the Lord will be saved.
But didn’t Jesus teach that if we think about sinning then we’ve already broken the law? You know, lust in your heart and all that. Do you suppose He meant having a bad thought is the same as having an affair? Ask your spouse. Jesus was telling us we’re sinners, even if we don’t carry through on every evil deed we imagine. We’ve broken fellowship with God with just a thought. Kind of makes you forget about the ax murderer. None of us has a chance of getting away with anything. 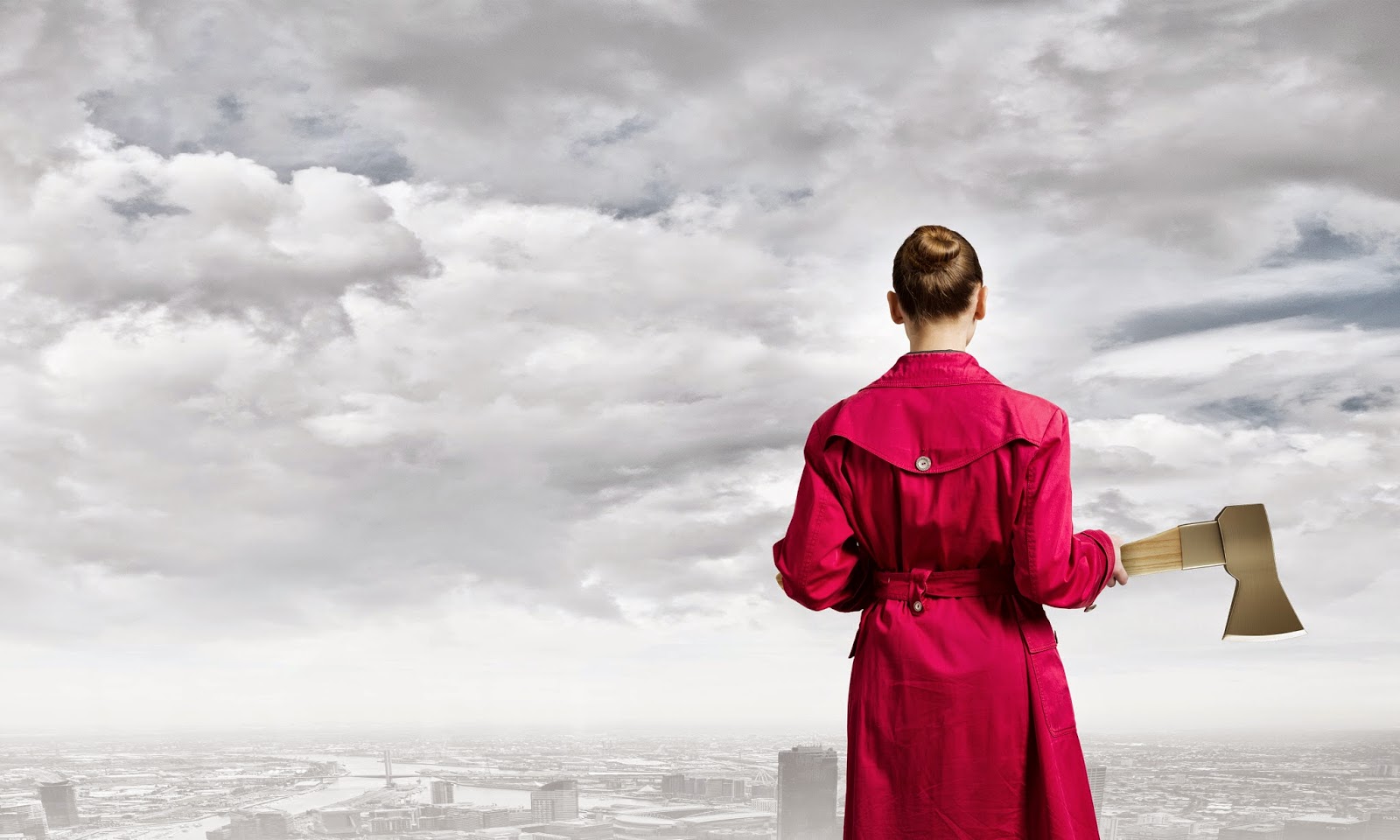 Will there be good people in Heaven who never did anything worse than tell a white lie? I’d like to meet that person. But yes, good people will be there. Not because they were good, but because they met the One who put an end to their self-righteous speculation of their own goodness. Will there be murderers in Heaven? I hope so. Otherwise, it’s a thin Gospel God poured out for us. Of course, it isn’t that kind—not lean or wimpy. Not at all wavering. But it is gloriously severe. What other kind could rescue us?
Posted by VictoriaBuckUnchained at 12:00 AM

Posted by VictoriaBuckUnchained at 4:30 AM