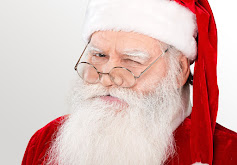 In July Frank stopped trimming his beard. By the time the giant tree went up at the mall, the proud white puff covered his chin and spread appropriately over the top of his velvety red coat. Despite his amazing morph into the jolly old elf, he worried kids from the neighborhood would know it was him. He couldn’t hide the rattle in his voice. Or the involuntary blink of his left eye. On day one of his part-time Santa job, a mom yanked her daughter off his lap and called him a creep.
“What’s wrong with you?” she yelled. “Stop winking at my little girl.”
The twenty-something photographer laughed. A couple of moms near the front of the line grabbed their tots and retreated from the Christmas village to the safety of the food court. Frank opened his eyes wide, but the blinking continued. So he shut the left eye for the rest of his shift. Three hours and he didn’t open that eye. His cheek made up for the need to blink by twitching every few seconds. But this seemed less disturbing to young moms. Or maybe they didn’t notice at all.
On day two a member of the neighborhood gang showed up. The short kid from across the street. He must have been about five. A Santa cap hung at an angle on his head. Frank had shooed the little petunia crusher from his yard more than once. Now here he was climbing onto Santa’s lap expecting to be forgiven for the Spring of Deflowering.
“What do you want for Christmas, little boy?”
“I want one of those tractors that really goes,” the kid said. “You know, with the big tires.”
Great. “What do you plan to do with a tractor?”
“You talk funny. Like that man with the pretty flowers in his yard.”
“Flowers, huh? I bet he works really hard to get those flowers to grow so pretty.”
“Nah, he just sticks them in the ground and waters them. But if I had a tractor I could help him.”
Old St. Nick’s left eye blinked. “Well, maybe you should just keep your tractor in your own yard.”
The boy’s eyes grew wide and a smile lit his face. “Thanks, Santa!”
“For what?”
“I’ll keep it in my own yard if that’s what you want. Thanks for getting me one.”
The kid jumped down and ran to his mother. Frank had seen her only a few times. Never saw a man across the street. Not once. The young woman smiled. Until the kid started bouncing. 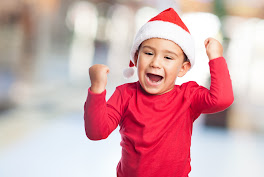 “Santa said I’m getting a tractor just like I wanted!”

Frank’s left eye blinked, and the young woman opened her eyes wide and hurried away, dragging the boy by the hand.
Santa spent the rest of his shift trying hard not to mislead children. Especially the ones who might figure it was him in the red suit. But no other familiar little runts climbed up on his knee that day.
Or for the rest of the week, for that matter. Except for the curly-haired princess who lived at the end of the block. She was too little to cause any problems. But give her a couple of years. Seemed her parents recognized Frank because the man gave him a knowing smile and the woman waved. They looked like nice folks.
After a couple of weeks of repetitious replies and worn knees, Frank got a paycheck. A little bonus to his fixed income. Money to get him through the winter. When his shift ended, he went to the company office at the end of the food court and changed his clothes. The next Santa on duty nodded a cheerful greeting as he strolled out to the Christmas village. And Frank headed home.
The kids hadn’t been too bad. In fact, he liked the conversation. It’d been a long time since he'd talked so much to so many people. And life, for now, didn’t seem so lonely. But the accidental promise he’d implied to the little boy across the street weighed on him. He’d watched out his window when the boy’s mother counted the change in her purse before climbing into her old car. No decorations had gone up on her house.
On the drive home, he passed the big toy store. One of the few remaining stores like it, Frank had heard. Online shopping was the way to go. But not for Frank, or a few others, it seemed, because the parking lot was packed. Frank hadn’t been in a toy store since he was a boy. And back then, a toy store didn’t fill eight thousand square feet. Must be a very different kind of place now. He turned at the light and found a space near the road. Before he reached the entrance, a kid pulled on his coat.
“Hey, aren’t you Santa? What are you doing at the toy store? Don’t you have some elves making stuff for you?”
“Uh, no, I’m not Santa.” His left eye blinked.
The little girl smiled. And winked back at him.
He hurried into the store, gave up on finding what he was looking for, and asked a uniformed, gum-smacking teen for help.
“In the back against the wall past the bikes and before the motorized cars,” the boy told him.
Frank headed left, passing trains and dolls and a lot of other stuff he didn’t recognize as being like any toy he’d ever known as a child. And there on the back wall he found them. The battery operated, fully detailed, big-wheeled tractors capable of flattening every plant in his yard. He checked the price. Two week’s pay in the pocket of a part-time Santa would cover it. With enough left over for wrapping paper and a bow. Frank smiled. And for the first time in many years, he whistled a Christmas tune.
Merry Christmas
Posted by VictoriaBuckUnchained at 1:30 AM No comments: