The Beginning of Thankfulness

I met a fellow believer the other day. He’d been down a hard road, much different than mine. I listened as he excitedly reviewed what God had done for him. The list grew, and I began to feel the need to tell him something. But I hesitated. It’s not that I don’t trust God’s calling—I just don’t always trust myself to pick the right words. You’d think words would come easily for a writer, but they don’t.

So I just kept listening as the stories of tangible blessings from the hand of God went on. The man’s gratitude showed. But the more he talked of jobs and money and health issues, the more I wanted to tell him what God did for me. Not that I could compete. Divine release from substance abuse was outside my experience. No miraculous healing. God answers my prayers, and sometimes His work is so obvious I know the answer could only have come from Him. But this guy had me beat.

The conversation turned to other matters. Life and family history. Books. Writing. Well drilling. (My husband’s line of work.) Whatever God had wanted me to tell the man slipped away into one of those missed opportunities. I have too many of those.

But then it came back around. He had one more story to share. Another miracle—a money matter. And when he was done, I spoke what was on my heart.

“I’ll tell you the greatest thing God ever did for me,” I said. “I was a hell-bound sinner, but now I’m going to Heaven. And Jesus made that happen.”

He seemed to hesitate, as if he’d remembered something. “That’s it,” he said. And he nodded.

Our conversation wrapped up and I went on my way. Did I say the right thing? Did it matter? Whatever God wanted to get through to the man, I think He did, in spite of my fumbling tongue. 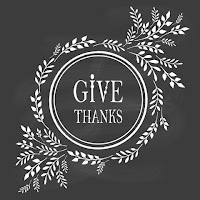 As I pondered what to write for this Thanksgiving blog, I remembered the man’s gratitude. We should all be ready to share our story of what God has done for us. But nothing compares to what He did long before we started counting our blessings. And that is what I choose to keep at the top of my list.

So then, just as you received Christ Jesus as Lord, continue to live in him, rooted and built up in him, strengthened in the faith as you were taught, and overflowing with thankfulness. Colossians 2:6-7

Posted by VictoriaBuckUnchained at 6:00 PM No comments:

The votes have been counted, and now the most obnoxious commercials on TV once again involve blue bears and their weird relationship with toilet paper. During the pre-election media blast, the politicians began to sound like cartoon characters. Blue bears. Red bears. Working to wipe away skepticism, accused of great nastiness by the opposing bears, they left voters speculating if any of them were worthy of the vote. Nevertheless, the good citizens voted, and the cartoon bears, red and blue, have been chosen.

Of course, they’re real men and women who've been given the daunting responsibility of leadership. The voters, whether pleased or disappointed, whether clinging to tradition or demanding change, must step back and observe the results of their choices. The new leaders of America might usher in revolution, but probably not. They might enforce tried principles, but they’ll make allowances. They might uphold the Constitution, or inch toward dissolving it. No matter theme of the show, conflict will carry the plot.

But ideological opposition has always been the meat of robust discussion. It summons indignation, demands protest, and then rests on a point well proven. At least, that’s way it should be. It’s not a matter of clinging to the old institution of respect that ought to keep the displeased citizen and the politician in check, but rather the historical decree of the Constitution. The value of an opinion is not so much its content as its right to be formed and stated. Warring over words has long been acceptable. Taking away someone’s freedom, their livelihood, or their life is not. The demanding wave of hostility flooding this nation must be curbed.

The representatives elected by the people have the power to ease the tension or encourage it. They may continue to come off as cartoon bears, waving their cottony-fresh demands like only they can. Or they may strike sensible solutions to the biggest problems this nation has faced in generations: immigration, healthcare, education, corruption, and so much more. But they may not be able to solve the bigger problem—the splintering of Americans into seething factions. Civil disagreement has been replaced by deafening hatred. The enraged, rioting citizens demanding change should beware of a society ruled by the thought police, the language patrol, and the non-elected regime. The cry for unified public opinion will not lead to unity but may end with the stripping away of the rights once held dear by all Americans.

Election day brought a few surprises, but for some voters it passed anti-climactic. For others, it offered relief. For all, it affirmed an altered political forum—one which can be readdressed the next time the votes are cast. Until then, may those who govern conduct themselves with respect, honor, and tolerance for the opposition. And may the good citizens of this great nation follow their prudent example.