The church I attend has moved into the here and now. I’ve been a member over thirty years so I’ve seen a lot of changes, but the progression in recent years has left some people with questions and concerns. Others have just left. They don’t like the loud music or the new methods of reaching the community. We are a Southern Baptist church in a southern town, and when I joined we were not what you’d call diverse. We are now. We are multi-racial, multi-lingual, multi-generational, and multi-cultural. I’ve not heard one complaint about this shift to becoming the kind of church we should have been all along—one that stands in stark contrast to the world’s divisiveness. But there have been grumblings over ministry modifications and worship styles. As for me, I embrace the change. Change brings hope. Hope for the future of the church. Perhaps in the future, we won’t feel the need to point out our diversity (like I just did) because it just is. We just are.

Changing doesn’t mean we doubt the success of the future church. The gospel doesn’t need any assistance in remaining the hope of all mankind. Nor does God require our cooperation to save the world. But while we’re here practicing church, shouldn’t we gladly take part in the graceful movement of the body of Christ as we meet the future?

The future won’t recognize the church I knew thirty years ago, a time when an unchurched person had at least some familiarity with certain scriptures—the Ten Commandments, the Golden Rule, John 3:16. But a growing population must be told, “This is a Bible.” In a country with so many churches, and freedom to worship, more and more people, especially children, have never opened a Bible. They’ve never held one. They’ve never seen one. They don’t know anything about the book, or the God who inspired it, or the gospel that is their only hope.

I’m not suggesting we forget our past. I believe in the importance of church history. I don’t believe we know it well enough. Scores of brothers and sisters in Christ gave their lives to give us a future. And yet we fuss over music. Even now Christians around the world die for their faith while I live a life driven more by temporal expectations than the eternal promise of the gospel. If making a few changes propels the message to the next generation, who am I to cling to the past? The gospel belongs to the future, so the future is where I belong.

Next time at Unchained: Ensuring the gospel reaches future generations is something I support, although, like I said, God doesn’t need our feeble methods to accomplish His purpose. It’s for His glory and our edification we follow Him wherever He leads. But there is another movement ready to carry a semblance of the church far past the constraints of the world as we know it. I can’t say I embrace this particular change. In my next post, find out who they are and what they’ve got planned. Spoiler alert: Science fiction has nothing on this.
Posted by VictoriaBuckUnchained at 12:00 AM No comments:

God is great. God is good. Let us thank Him for our food. By His hand we all are fed. Give us, Lord, our daily bread. Amen

Most children, or at least those who learn to give thanks at mealtime, recite this little prayer. It teaches the basic lesson of expressing gratitude for God’s provision. But even before giving thanks and asking God to meet our needs, the truth of God’s attributes are taught in those first two short sentences. First, greatness is accredited to God. And then, goodness. An important lesson, and yet it’s often repeated in vain until children grow into adults who may or may not increase in understanding, in the expression of prayer, or in the realization that God is not only great, but He’s also good.

The distinction between the greatness and goodness of God is addressed in the first book of the Bible. God makes a lot of something out of absolutely nothing. The Creator of the whole universe brings it all down to a perfect piece of a paradise with a crowning touch of humanity, and He introduces Himself to His creation. His greatness is not in question. But for reasons that perfectly happy first couple could not comprehend, the Great Creator allows His goodness to become of matter of doubt.

Now the serpent was more crafty than any other beast of the field that the Lord God had made. He said to the woman, “Did God actually say, ‘You shall not eat of any tree in the garden’?”  And the woman said to the serpent, “We may eat of the fruit of the trees in the garden, but God said, ‘You shall not eat of the fruit of the tree that is in the midst of the garden, neither shall you touch it, lest you die.’” But the serpent said to the woman, “You will not surely die.  For God knows that when you eat of it your eyes will be opened, and you will be like God, knowing good and evil.” Genesis 3:1-5
God’s greatness wasn’t the issue when Eve reached up and grabbed hold of one thing God told her not to eat. The serpent didn’t raise the question in her mind as to whether or not God was great. But…was He good? Really? Maybe He didn’t have her best interests at heart after all. Maybe He was withholding something 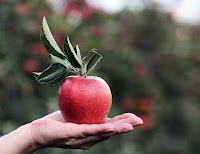 wonderful. Maybe He didn’t tell her everything she needed to know to live a perfect life in a perfect place.

And so the question arose, not just for Eve and the man who let her do all the talking in this world-changing event, but for the rest of us, too. The question of God’s goodness dropped us onto a slippery path that eventually led us to question even His greatness.
Now, a long time after Paradise and a long way down after the Fall, how do we know that God is not only great, but that He is good? Do we know by the number of good things that happen in our lives? No matter how good life once seemed, most people meet a crisis that causes them to question God’s goodness. This is no Garden of Eden we’re enduring. Sometimes it’s more like a war zone and we’re living with the scars of our battles. Sometimes those scars run deep enough to kill any remembrance of God’s goodness. If God is good, why is the world so bad? We might find some assurance of God’s greatness in the world around us, but His goodness will always come into doubt. It’s our nature to ask the question and we’ll never find enough evidence to convince us of God’s goodness without a resounding, eye-opening transformation.
There is no other way to know that God is good except by the truth of the Good News.
But when the fullness of time had come, God sent forth his Son, born of woman, born under the law, to redeem those who were under the law, so that we might receive adoption as sons. And because you are sons, God has sent the Spirit of his Son into our hearts, crying, “Abba! Father!” So you are no longer a slave, but a son, and if a son, then an heir through God. Galatians 4:4-7

He is great. He creates, sustains, and holds the world together by His might. No one can measure His greatness. And He is good. His goodness can be measured by the depth of His love us in that He provided a way of escape from sin and death. We might acknowledge His greatness, though in our present state we can’t fully comprehend it. But it’s the light of the Gospel that brings us to acknowledge His goodness. A great God might have left a fallen world in the darkness. A good God never would.