Welcoming a Summer of Weirdness

Well, like last year I’m taking the summer off from blogging. Here’s what I’ll be working on: In a few weeks, I’ll release a novelette. If you’ve ever wondered what makes a book a novelette, a novella, or a novel, here’s the determining factor: A novelette contains between 7,500 and 17,499 words. A novella contains between 17,500 and 39,999 words. And a novel has more than 40,000 words. My own novels run about 80,000 words.

My novelette is around 13,000 words, which makes it about fifty pages long. Oh, but there won’t be any pages because it will only be available on Kindle. This really short novel (or really long short story) is called Gears. Here’s the blurb: 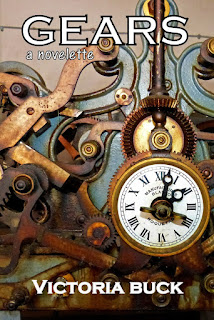 What happens in the black box truck? Rae hopes she never finds out. She hides at night from the truck and the slavers. The truck is a mystery, but the screaming inside it can’t mean anything good. The slavers are more obvious—they’re out for young drifters to supply their markets. And they’ve got their sights set on Rae. After a stranger rescues her from being captured and sold, she hides in an old house, where she’s brave enough, or stupid enough, to read an outlawed book.

When she meets her hero she finds out he’s the one who drives that black truck. Is he an enemy or a friend? After he saves her again, she decides to trust him. And she steps inside the truck she swore to avoid to her death. Will the enticing young man bring her salvation a third time? Or will Rae be the one whose screams fill the darkness tonight?

Okay, if you’re thinking that sounds weirder than my transhuman’s woeful tale, you’re right. Gears is young adult post-rapture dystopian with a little steampunk thrown in for fun. Yeah, one of those. Yes, it’s got a Christian slant. No, the Christian market is still not too open to this kind of stuff. So I’m stubborn. I write what I’d like to read. And as I’ve said before, it ain’t Amish romance.

I’ll also spend some summer days working on my next novel. It’s a book for the Christian market…and it’s atypical for the target readership. Again. But it’s not futuristic, or sci-fi, or dystopian. And that’s all I have to say about that for now. 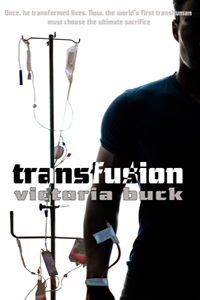 As for my sweet, misunderstood, on-the-run transhuman, book three releases September 22! Transfusion brings the journey of Chase Sterling to a satisfying conclusion. Is it a real ending? I’m not sure I can end a story, but it is book three of a trilogy so we’ll call it the end. Here’s the blurb:

Held captive in the frozen wilderness, transhuman Chase Sterling almost loses faith that he’ll ever be reunited with his bride and with the persecuted souls he’s promised to guard. His escape leads to even greater struggles, and discoveries about his own abilities. At last, he arrives at the unusual location his people have chosen as a hiding place. And then things get complicated. His wife’s been kidnapped and the underground faces annihilation. Victory and heartbreak build Chase’s resolve, until he is forced to face his worst fear. Now he must choose whether to sacrifice himself. He's endured so much since they transformed him into the world's first transhuman, but will he survive the final transfusion?

Watch for my guest blog post at ACFW in July, and for new posts at Unchained beginning September first. Enjoy your summer. Read a book or two, even if it’s Amish romance. As for me, I’ll be writing something weird.

The Peeve of My Christianese 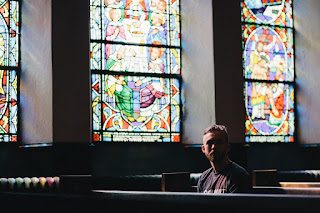 In a blog post a while back, I addressed the uniquely acquired native language of my people. We speak Christianese. We talk in code to one another. We gush it out to the unredeemed, who don’t understand it. With enough exposure, they pass it back and forth amongst themselves, injecting their own dialect until the words become palatable. One of the more commonly used idioms of Church people (and other people) has become a pet peeve of mine. I’m not sure why. Perhaps it’s my cynical nature that makes me question the motive behind throwing this bone at someone in distress without any reference to Scripture or offer (serious offer) of prayer.
Before I tell you my peeve, let me state that I am not caving under unbearable burdens, though I do have some bearable ones. I’m not falling into unpardonable sin, though I do from time to time get a nudge from the Spirit warning me to turn around and go the other way. And I haven’t failed to get back up after being knocked down. But maybe I haven’t been knocked as low as the guy who just got served with this catch-all from a Christian. Here's my peeve: “God will never give you more than you can handle.”

With my cynic’s ear, this is what I hear when someone shares that gem with a hurting, broken, scared-to-death soul: “Well I don’t know about you, but I could handle it.” Or, “That’s too bad. Let me know when it’s over.” Or, “What do you expect me to do about it?”
Of course, most people mean well. They will pray. If they really love the person, they’ll pray hard and they’ll assist with handling the situation purportedly given by God. I asked a pastor friend to share his thoughts. He had a different explanation of why people say this. His viewpoint is more sensitive than mine, and I appreciate his sympathetic reasoning.
Here’s what he said:
“I believe Christians quote the phrase because they want to believe it in its most basic meaning.  They truly want to believe that a loving God would not allow anything to happen to confessing Christians beyond what they physically or spiritually can handle.  It’s a mantra that we repeat often in the hopes that it will be true; but deep down we have our doubts and misgivings. Do I believe it’s true? Yes, but I think there is more to the issue.  Can I handle the death of a family member or will I be deeply affected by their death in such a way that I’m changed for the negative? If I lost everything as Job did would I be crushed to the point of suicide or would I do a Phoenix and rise from the ashes?  I don’t know but I’m sure my all-knowing God does.  Thank God I’ve not been “tested” to that degree yet.”
In moving past cliché to understanding, one Bible verse must be considered the crux of this popular saying:
“No temptation has overtaken you except what is common to mankind. And God is faithful; he will not let you be tempted beyond what you can bear. But when you are tempted, he will also provide a way out so that you can endure it.” I Corinthians 10:13
This is God’s assurance He will not leave us to face temptation on our own. That’s what the verse is about. We shouldn’t make anything else out of it.

While there is no verse in the Bible to specifically tell us God won’t give us more than we can handle, a theme is present to encourage us that by the grace of God we can survive immeasurable burden. The key here is grace. Without it, we really are completely hopeless. The Bible does portray some as being given more than they could handle on their own. And some verses make it hard to believe we can handle anything considering who we are and who God is:
Who can stand before His indignation? Who can endure the burning of His anger? His wrath is poured out like fire and the rocks are broken up by Him. Nahum 1:6
For the wrath of God is revealed from heaven against all ungodliness and unrighteousness of men, who by their unrighteousness suppress the truth. Romans 1:18
In light of the truth that we are helplessly lost without the grace of Christ to rescue us, the sentiment that we can “handle it” seems almost anti-gospel. God allows sin to affect us all in the most detrimental way, and we absolutely can’t handle it. That’s why we need salvation.
Jesus said, “Without me you can do nothing.” (John 15:5) Paul said, “When we were utterly helpless, Christ came at just the right time and died for us sinners.” (Romans 5:6)
So in a way, God did give us something we couldn’t handle. And then he handled it. There’s a catch to the Christianese. Maybe we can’t handle it. But God can.
And so another theme emerges in the Bible: God might give us more than we can handle so we’ll learn to depend on Him. Isaiah said, “Woe is me! For I am lost; for I am a man of unclean lips, and I dwell in the midst of a people of unclean lips; for my eyes have seen the King, the LORD of hosts!” (Isaiah 6:5). He couldn’t handle being in the presence of God. But then God used him in a mighty way. David was undone before God by his own sin, and yet God loved him. Jonah refused to obey and ended up fish bait, but God saved him. Job, a righteous man, faced greater loss than most of us can imagine, but God restored and blessed him.

Scripture is filled with great hope and promise. God will not leave us on our own to face life (John 16:33), death (Psalm 23), Satan (Ephesians 6:11), temptation (Galatians 5:16), or even the trials we meet daily (Romans 12:12). Still, situations are sometimes beyond our ability to handle. And it seems like some people, even Christians, give up on life. They give up on God. I know how that appears from the outside looking in. But I don’t know what God knows.
Maybe there should be a big IF at the end of my peeve proclamation. God won’t give you more than you can handle if you know Him well. If you follow Him closely. If you admit you can’t handle it without Him. Or maybe after living all those IFs you’ve gotten more than you can handle anyway. In that case, maybe you’re just not meant to handle it. Hang on. God’s got it.
And so perhaps we who speak Christianese should make a slight alteration to our mantra. Maybe we just need to change one word: “God will never give you more than HE can handle.”
Posted by VictoriaBuckUnchained at 12:00 AM No comments: