The Reason for All Seasons

For years people have proclaimed Jesus is the reason for the season. Meaning that He is the reason for Christmas. Of course, not everybody meditates on the Christ child while celebrating the chaos they gleefully dive into once a year. Some don’t give a thought to the ancient tale of the baby born of a virgin. Shopping, parties, and forcing screaming toddlers onto Santa’s lap are the unforsaken traditions. The day after, they clean up the mess and try to forget the holiday assortment of exhaustion, disappointment, and debt. Then a year later, they do it all again.

When I say they, I mean us. Even in my community of Christians, it happens. We live up to our societal expectations, and it’s not such a bad thing, but we forget the immense reason for this season. The astonishing act of God coming down here. The ultimate gift for our redemption. The odd plan to offer our only hope through an infant who was, who is, God Himself. The awestruck wise men brought good gifts rich in symbolism of the newborn King’s royalty, His worth, and His future suffering. And now we gift each other with the trivial, soon broken or forgotten. Even when we offer a gift of great value, we’re expected to give again next year. ‘Tis the season, after all.

This year, I’ve heard it said that Jesus is the reason for all seasons. Not just Christmas, but every season. This is the time of year we send out cards embossed with Season’s Greetings, so what does it mean to declare that Jesus is the reason for all seasons? The four seasons—spring, summer, fall, and winter? The seasons of life—birth, childhood, adulthood, death? The years spent raising children is one season. Aging brings another season until one dies, leaving others to continue the seasons. All of life can be categorized into seasons. A nation can be born, and thrive, and then wane to less than it once was. Even the broad expanse of our universe, once new and seemingly endless, may shift into variable seasons of existence. Is Jesus the reason for all seasons?

He is more than we can imagine. And yet this time of year we view Him simply as a baby. If we pay close attention, if we slow down, we will remember to behold the infant and celebrate with joy. What a wonderful gift God gave us. 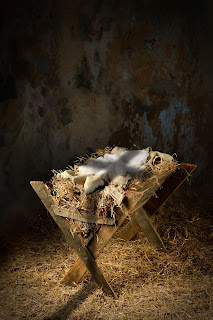 Every season of our lives, of our world, gives us hope to know Him, to be redeemed by Him, to seek Him more, to worship Him, to cling to His love for us, to tell of His goodness, and to obtain His eternity. So in this merry season, especially when we’re caught up in the holly jolly of it all, we must fall to our knees before the manger and gaze at the shadow of the cross. And be awestruck by God’s immeasurable gift.
Posted by VictoriaBuckUnchained at 12:00 AM