This post concludes my series, “Another Civil War in America?” I’ve gotten a few nasty remarks on the previous posts. Thank God, we are still a nation where opinions can be shared openly. This series leaves many issues unaddressed. I offer no solutions for a nation that is, perhaps, on the brink of anarchy. I have nothing to offer but hope in Christ, which is everything. To read previous posts, click on the titles:

Introduction: Another Civil War in America?
Part I
Racism: The Church, theMedia, and the New Definition of Racist
Part II
Abortion: A Once Private Decision That Became aCelebrated National Demand
Part III
Potusphobia: Fear, Hate, and the President
Part IV
Theophobia: America Has Turned on Religion

The phrase seems counterintuitive--national narcissism. A nation of individuals bonded together by a common goal, united by a government of their own design, should not abandon community for self-identity. But that’s what has happened. Not yesterday, or last year, or last election. The shift began decades ago. In many ways, the beginning of the turn pointed Americans in the right direction. We were a divisive people, separated by ideals, social standing, race, and privilege. We were, at some point, headed toward rectification. But the passage was forged in egocentricity, and so it was destined to fail.

Woven into the nation there was the precedent call of Christ for His people to love one another, and to love their neighbors. Not with political strings attached. Not with an agenda lurking behind the love. Some Christians did as they were taught. Others abandoned love for the sake of self-righteousness. As well, the nation at large, individually and in organization, chose acceptance or disapproval. Tolerance or bigotry. The churched and the unchurched were not so different in this respect.

As Americans, we hold to our political sway, or religion, or convictions, and it is our right to do so. But some, with little care for community, are ready to strip away the rights of all with whom they disagree. Behind this contagion of narcissistic behavior is the pull to rebuild America into something that it is not, that it has never been. As a result, we are being ripped apart. We have been carried into discord, and national upheaval is looming. 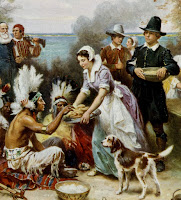 In this season of Thanksgiving, I consider the simplicity of that first day of celebration. It followed great turmoil, and suffering, and death. It brought together people of different cultures—natives and immigrants. Those brave settlers, and the generous inhabitants of the land, didn’t celebrate the day with ten different kinds of pie. They didn’t argue over how to prepare the turkey. They simply came together in peace.

Of course, things changed. Peace didn’t last. It never does. Except for the everlasting peace of knowing the Prince of Peace. As America changes, again, I choose to live at peace, taking into consideration the good of the nation as a whole. Remembering that I am foremost a citizen of another nation, a holy nation. I will in no self-righteous way demand my rights, but I will stand against oppression. And I will remain thankful for this great nation where God has chosen to leave me for a little while.

Be subject for the Lord's sake to every human institution, whether it be to the emperor as supreme, or to governors as sent by him to punish those who do evil and to praise those who do good. For this is the will of God, that by doing good you should put to silence the ignorance of foolish people.  Live as people who are free, not using your freedom as a cover-up for evil, but living as servants of God. Honor everyone. Love the brotherhood. Fear God. Honor the emperor. I Peter 2:13-17