The Evening News, Brought to You by AI

I vaguely remember Walter Cronkite reporting the news as the quiet evenings of my childhood slipped into a time less innocent. I don’t recall much of what he said, or how he said it. My parents paid attention, I’m sure, but all I can picture is the man. A reliable, respectable human being. He reported in line with the standards of objective journalism. He was an upright news anchor, and we could believe him. At least, that’s the way I remember him. But maybe I only remember what the adults around me believed. And maybe they only believed what the powers behind the evening news wanted them to believe.

In any case, news coverage is not be what it once was. Now, reporting the facts is less important, perhaps, than supporting the agenda. We may wonder if our media here in America has fallen under a spell of sorts, but we get the gist of daily events from men and women who are not under any real coercion to tell us lies. They may cloud the truth. They might hope to sway us. But at least they’re not being programmed. Yet.

When I first heard of China’s AI news anchors I thought, why build a robot to read the evening news? Why not create a friendly teller who could never be tempted to steal money from the bank? Or a nice waiter who doesn’t require a tip? In my books about the world’s first transhuman, I wrote about the convergence of politics and entertainment, about the use of the media to set the pulse of the nation, so I get it. A trustworthy face at the end of the day to spin the bad news with compassion, and praise certain leaders with a confident nod, is a better use of AI technology.

China’s first AI anchor was introduced a few months ago, and recently joined by a female counterpart. The male anchor is handsome, perfectly groomed. The female, modeled after a real reporter, appears impeccable, right down to her pearl earrings. The political slant of these two is not an issue, since they’re not real. They have no agenda. No opinion. Their standards are unquestionable. They are just as safe, as welcoming, as quaintly familiar as Walter Cronkite with his gray mustache. And people will believe whatever they say, welcoming their calming voices at the end of the day. But an AI anchor has no voice. Not really. 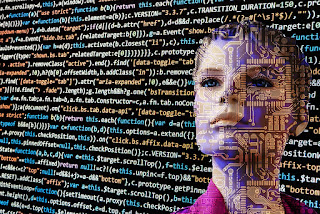 China leads the way in AI. How long until that country’s friendly couple are replicated with American features, maybe a slight Midwest accent? Would AI anchors in the U.S.A. grow a new level of trust between the people and the media? Would their programming encourage adherence to the old standards of objective journalism? If not, maybe nobody would notice.

Maybe no one will notice at all when the robots bring us the evening news.