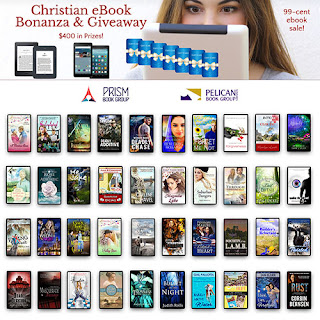 For the next few days, my publisher is offering some great books for Kindle and other e-readers at a discounted price of 99¢, plus you can enter to win prizes! Don’t miss this opportunity to discover interesting stories, follow wonderful authors, and win fantastic prizes!  Click here and check it out:

Here are the books I’ve purchased (so far) during this great sale:

Charlotte Blackburn—Beautiful, intelligent, a gifted tinkerer—lives in a cloistered world of wealth and privilege beneath the Electric Tesla Dome that shields survivors of The Great Calamity. But when her father is abducted, and a strange sickness starts transforming men into vicious monsters, she discovers that technology is no protection at all. Ashton Wells has a dire mission: Secure Colonel Blackburn and deliver his research to The Order of the Sword and Scroll. But the plan goes awry, and he is left with nothing but the colonel's daughter who has a target on her back and is willing stop at nothing to rescue her father—including handing over to the enemy the only means to stop the monstrous plague. Branded as traitors, Ashton and Charlotte brave the treacherous floating sky ports of Outer City to hunt down the elusive inventor who is the only person able to activate the strange device that harbors the secret to their salvation.  With the government closing in, a rebellion brewing in the streets, and terrifying Tremblers attacking the innocent, the two must work together to stop their fragile world from crumbling once more into destruction.

Society of the L.A.M.B.
by Judy DuCharme
In a raucous colony of those who celebrate dark desires, Josiah and other LAMBers who believe King Glory lives are hunted and imprisoned…or worse.
But hope and truth endure in the midst of total danger. After fleeing the colony, Josiah finds light and hope at his grandfather's house, where a secret gathering of LAMBers have escaped the watchers. After learning of the power of the shout within himself, Josiah is chosen to carry the truth to others. But how can he return to the colony without being captured and put to death? The shout cannot be denied. Josiah knows his mission.

This absorbing fiction adaptation of Corbin Bernsen's film Rust, which featured him in the starring role and director, is currently available for purchase and streaming online at Netflix and other online sites.  In the midst of a crisis of faith, a man finds hope where he least expects it—his hometown. James Moore is a former pastor who returns home to discover his childhood friend is implicated in the arson of a farmhouse and the murder of an entire family. Convinced of his friend's innocence, James sets out to find the truth. In the process he reclaims a relationship with his father, restores hope to a floundering congregation, and rediscovers his own lost faith. Rust is an uplifting tale about faith, family and the powerful ties that bind a community.

So, for me it’s steampunk, dystopia, and restoration. (Yes, I have eclectic tastes.)  What’s your choice? Maybe you’d like a near-future story about the world’s first transhuman! Here's book one in my trilogy for only 99¢:

What if the first man reborn of an evolutionary leap doesn't like his new life? Is escape even possible? The time is right for introducing the world to the marvels of techno-medical advancements. An influential man, one loved and adored, is needed for the job, and who better than celebrity Chase Sterling?

After suffering injuries no one could survive Chase is rebuilt like no one has ever seen before. In the not-too-distant future a man—if he can still be called a man—breaks away from the forces taking over his life and finds new purpose in the secret world of hiding believers.